Things to do in Mallorca

You'll often hear people singing the praises of their favourite holiday destination, where there's 'just so much to do' and 'something for everyone'. And this is exactly how we feel about this beautiful Balearic island. Once you start picking out all the possibilities for your Mallorcan itinerary, plans for a week in the sun might suddenly become two weeks of full blown holiday exploration. Towering mountains, captivating cities, beautiful beaches – the list literally goes on just below. These are our top picks when it comes to things to do in Mallorca. So dive in and discover just how much there is to see and do on these shores.

View villas in Mallorca About Mallorca 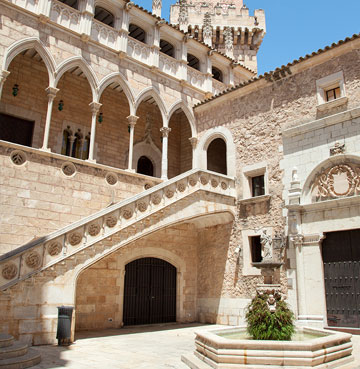 Art, history – it's all there just waiting to be ticked off the culture vulture checklist. But Mallorca is also home to a cluster of unique museums, truly offering something different. None more so than the Spanish Village – Pueblo Espanol. Home to replicas of some of the finest Spanish buildings, the cream of its architectural crop. Alhambra Palace's beautiful courtyard, the Toledo house of the artist 'El Greco' and Madrid's Plaza Mayor Square to name a few. Rome wasn't built in a day, but you could be taking a mini tour of Spain in half of that.

Where better to indulge your inner child than with a trip to Sa Pobla's Toy Museum? With over 4000 toys from all across the globe, this has to be the ultimate playroom (although you can't technically play with them). But this is just another chance to travel back to your childish mindset, using your imagination to bring them to life. Not only is this a trip down memory lane, it's also your chance for an insight into childhoods across the world and at different points in time. Borne from the whimsical mind of Ton Boig Clar, he has reminded countless visitors that you're never too old to find joy in a childish toy.

Forget memory lane, you could be time-travelling to the prehistoric past at Son Fornes. Swapping the toys for Talaiotic ruins at the excavation site of these ancient finds. The nearby museum is even housed in an 18th century flour mill, adding another little pinch of history. Sa Llotja is last on our list of museums with a twist. Hosting cultural events and exhibitions, you could argue that it shouldn't have made it onto this history-light list. But a building this beautiful more than earns its place! The impressive façade faces the waterfront, with its two turrets standing watch over the waves. Originally the island's stock exchange, it has a fascinating story to tell. If only walls could talk. 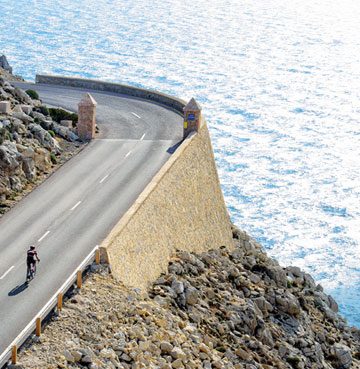 Admittedly the 'Tour de Mallorca' doesn't have the same ring as the famous French race, but make no mistake this is a cycling hotspot. And unlike the challenging routes on the island, convincing cycling fanatics and casual pedallers to come to its shores isn't an uphill struggle. Cyclists flock here in their droves for a number of good reasons.

300 days of sunshine every year and much warmer temperatures tempt you into putting one foot on a pedal. While the incredible terrain and breathtaking scenery are enough to get your other foot on, cycling your way across Mallorca and ringing your bell in delight. And the beauty is that there's routes for every ability and taste. Whether you harbour secret ambitions of wearing the yellow jersey or just need a leisurely cycle to explore the island a little differently.

The Tramuntana Mountain range offers plenty of trails to test even the most experienced cyclists. The tricky decision is which one to pick, because there's just so much incredible scenery to enjoy as you put the pedal to the metal. Cap de Formentor guarantees amazing views from the lighthouse at the very tip of the island. The promise of Mallorca's finest scenery is a great incentive to keep going when your legs get a little heavy.

The flatter terrain of some coastal trails lets you take things a little more easily. You'll find plenty of cycle paths winding their way along the seafront – ideal for beginners and the less confident. The Bahia de Pollensa route is a particular highlight for those looking to set a PB in sights seen, as opposed to cycling at speed. 8km of paths work their way from Alcudia to Pollensa, taking in lots of coastal charm on their way. Palma offers pleasant routes of its own too. Whether that means heading to Playa de Palma or venturing a little further to S'Arenal, that's up to you. Both can be easily completed in less than an hour – leisurely pedalling, here we come! 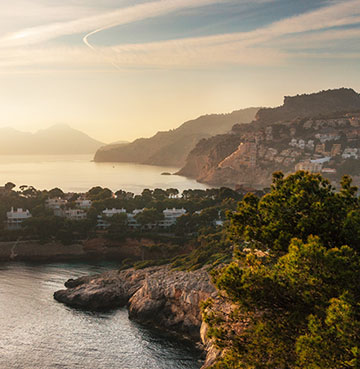 Whether it's hiking to the top of towering mountains or exploring the incredible national parks, Mallorca's got natural beauty all sewn up. And that's before you even delve into the coves and beaches dotted along the coastline.

A national park and UNESCO World Heritage site all wrapped into one, it's hard not to touch upon Tramuntana. Nearly 90km long, it's a treasure trove of peaks, forests, lakes and traditional villages. Its two tips highlight the diversity you can expect to find tucked in between.

Cap de Formentor is where the mountains meet the sea, promising panoramas like nowhere else. The lone lighthouse stands strong against the backdrop of the waves, the perfect complement to the coastal beauty. The National Park ends at the charming village of Andratx, nestled at the foot of the mountains. Brimming with rural charm and tradition, this sleepy village is the ideal place for a laid-back look at local life in Mallorca. The natural parks of Llevant, Sa Dragona and Mondrago offer plenty more natural beauty for those of you that just love the great outdoors.

Mallorca may be home to a number of art museums and famous creatives, but the real Mediterranean masterpieces can be found along the coast. It's no surprise that Mother Nature has been able to craft so many magnificent beaches. Dipping her brush into a colour palette of turquoise seas, golden sands and splashes of green, grey and brown from the cliffs and mountains.

From the quiet coves to the vast expanses of sand, there's a beach for everyone here. Cala Deia hides itself away behind the cliffs, helping to retain its hidden gem charm and keep the locals flocking back. While Cala Tuent is a picturesque spot among the pines, ideal for days spent unwinding. Villa holidays in Mallorca are often a family affair, so you'll be pleased to know that there's plenty of beaches for all ages. Alcudia is home to the longest beach in Mallorca, with flat sand that makes for fun for little ones. It's not all hidden gems and hot spots for families, there's thrills to be had too. Puerto Pollensa is where you can try your hand at whichever adrenaline-filled watersport tickles your fancy. And then there's the exotic Es Trenc. About as idyllic as beaches come, this could easily be the Caribbean! Fine white sand and brilliantly blue seas, where better to soak up the sun?

Discover some of our sandy top picks, in our best beaches in Mallorca guide.

Find your villa by the beach 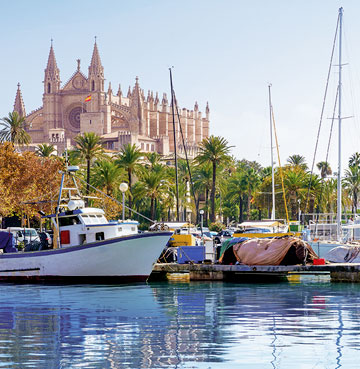 So, technically Pollensa is a town – but its contrast to the Mallorcan capital of Palma lets us show two very different sides to this Balearic island. Two equally fascinating tales of history, told in their own way.

The scene of a number of conquests, Romans, Moors and the Byzantine all decided Palma was the missing piece of their empirical puzzle at some point. And who can blame them? Today it's just as in demand, as a beautiful city craved by holidaymakers. But these tourists simply bring their camera, with plans to capture incredible memories and photos - as opposed to plans to conquer and capture the capital for themselves.

The mark and monuments left by its invaders has meant that there's plenty of opportunities for the perfect holiday snap. Gothic churches, medieval buildings, the Arab Quarter – take your pick of the beautiful backdrops. Sitting at the water's edge, the 14th century cathedral is an undoubted highlight. Home to 61 stained glass windows and with 20th century touches from Antoni Gaudí, this is every inch the masterpiece. The Arab Baths are the best example of the Moorish past, remaining in excellent condition to this day. Any chances for a quick dip are unfortunately behind you, but a wave of impressive architecture will wash over you as you enter. Light shines through the dome that sits atop 12 impressive pillars. Standing the test of time, while also showing signs of just how long they've been holding up the 'Banys Arabs'.

Even walking through the streets, you'll find yourself at a number of architectural and historical crossroads. The wider Roman roads meet the winding streets of the Moorish era, creating a unique floorplan for this wonderful city. 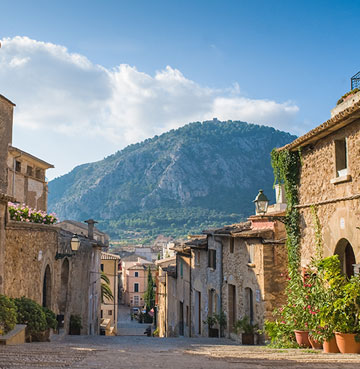 Mountain views, cobbled streets that climb their way upwards and beautiful stone buildings – it's no surprise that Pollensa's so popular. It's not a recent trend either! It's been drawing visitors for over 2000 years, since the Romans made their way to this part of Mallorca. Their bridge over the Torrente de Saint Jordi is a testament to Roman architecture and still stands strong today.

Moors and marauders followed, leaving their own mark on the town too. But it was once the invasions had finally ended that Pollensa really found its identity. Painters and poets replaced the pirates – adding creative flair to life here. You'll still spot this today, with boutiques showcasing the fantastic fruits of local labour. Jewellery, home decorations and fabrics all show the artistic nature that was ingrained here in the 19th century.

There's plenty of religious monuments to choose from, but the pick of the bunch stands at the top of the Puig Mountain. Don't let the name put you off - this isn't going to be a tiresome trek, lasting for days on end. Puig only stands at 330m high, so it's really more of a challenging hike than a full blown expedition. Whichever way you look at it, the views from the top are well worth stretching your legs. A chapel and monastery sit at the top of its modest peak. Built in the 14th century, these fascinating buildings offer views over Pollensa, its port and the shimmering sea below.