No stranger to traveller's affections, France is a well-seasoned soldier in the holiday stakes. Decked out with dazzling natural wonders and iconic landmarks, glitz and glamour are second nature to this celebrated corner of the world. Throw in a collection of unforgettable beaches for good measure, and this vacation veteran will have you weak at the knees. From mainland majesty to Corsica's Hollywood good looks, Mediterranean magic doesn't get more spellbinding than this. Claiming more hearts than the celebrities who sail in on their luxury yachts, here's the inside scoop on the best beaches in France.

View villas in France About France 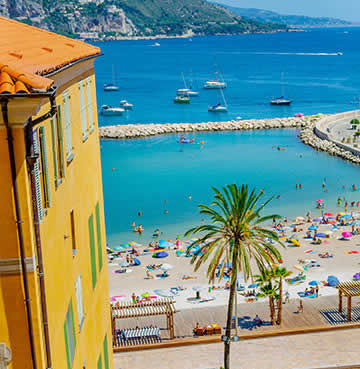 Provence and the Côte d'Azur

Soaking up 300 days of sunshine, this real life fantasyland is every bit as pinch-me perfect as you'd expect. Mother Nature's flair and finesse is loving displayed in low-key coves and stretches of Riviera royalty, wooing even the fussiest sand-seekers into submission. The subject of more holiday daydreams than anywhere else on the planet, you'll be beach bound before you know it thanks to touch down times of under two hours from the UK. From best-kept secrets to shores that are almost as famous as the A-listers who grace them, the Côte d'Azur broke the mould with its contribution to France's coastal repertoire…

The Côte d'Azur is a heavenly cocktail of flawless beaches, majestic mountains and sleepy stone villages. Literally translated as the azure coast, the revered region needs little introduction. Sprawling out for 75 miles, all that's missing from this sun, sea and sand love triangle is you. Boasting household names like Nice, Saint-Tropez and Monaco, it's your one stop shop for golden glows and after dark shows. Among other legendary hotspots, Cannes is a must for anyone with A-list aspirations. Famed for its film festival, the city rolls out the red carpet for holidaymakers year round.

Beaches in Cannes range from bustling bays to quieter coves. The crème de la crème can be found nearest to la Croisette, the city's three kilometre promenade and centrepiece. Although mostly private, these are the sandy sweet spots for sunbathers who want to see and be seen. It may seem a little extravagant, but that's what the French Riviera is all about. So embrace a day of sparkling seaside luxury as you sip on a glass of rosé. C'est magnifique! 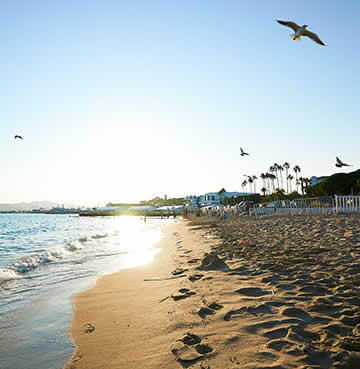 For those who want to see the sights and avoid the hum of hedonism, there's plenty of sand to go around. Public beaches are just as lovely and well-maintained as their private counterparts, with a more relaxed vibe and free of hefty price tags. Come prepared with a towel, umbrella and picnic and you can have a DIY beach day for a fraction of the cost. Plage du Casino and Plage Mace are closest to the heart of the action, while plenty of other beach beauties can be found slightly further out. Plage de Midi is a stone's throw from Le Suquet, Canne's old quarter, while Palm Beach is a quiet cove looking out to the island of Sainte Marguerite.

Cinematic sunsets are something of a speciality in Cannes. Whether you watch from the comfort of your towel, a trendy rooftop bar or set sail for a closer look, it's undoubtedly the perfect end to any beach day. Set to a backdrop of brooding mountains, sit spellbound as the sky shines in shades of gold and soft peach – the evening's only just begun… 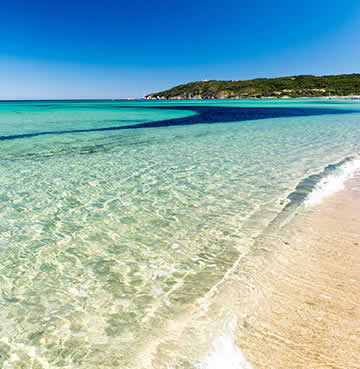 Singlehandedly fuelling Saint-Tropez's fame, Pampelonne sky-rocketed the celebrity-riddled market town into the stratosphere. Stretching out for three miles and set in a sheltered bay, golden sands are met by sparkling turquoise waters. Backed by rolling dunes and breathtaking natural beauty, you'd be forgiven for not realising the world's most glamorous party scene was a stone's throw away. Closer to the romantic hilltop village of Ramatuelle than Saint Tropez itself, Pampelonne is actually a collection of beaches that have clubbed together to become part of the 'in crowd'. One of the most papped places along the French Riviera, the whole set-up is achingly stylish. This is the spot to rub shoulders with the rich and famous, so break out the oversized sunnies and lap up the luxury lifestyle.

Roll out your towel and settle in for a day of effortless elegance, or treat yourself to a sunlounger and parasol at one of the famous club houses – you are on holiday after all. Those with a penchant for the finer things in life will find a catalogue of chic bars and fine dining at their disposal. While low maintenance beach lovers can savour peace and quiet in the form of nearby Bonne Terrasse, an out-of-the-way wonder at Pampelonne's most southerly point. 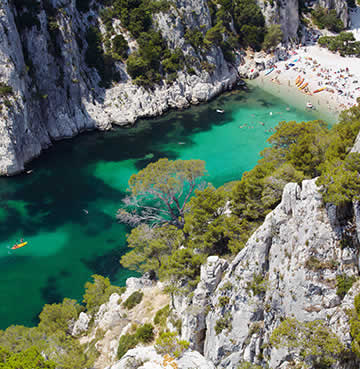 Far away from the jet-set elite and million-dollar-yacht lined marinas lie Les Calanques de Cassis. The pièce de résistance of the French Riviera, no amount of star studded sands can match the splendour of nature's meticulous craftsmanship. A whopping 120 million years in the making, the beauty of the Calanques National Park is worth every century. Idyllic inlets and craggy coves occupy 10 miles of coast between Cassis and Marseille, featuring France's highest cliffs and 140 protected species. One glance at the glistening waters, soaring limestone rock face and piercing blue sea and you'll never want to leave!

Arrive in style from the sea and kayak your way to tranquillity or opt for a boat tour from Cassis harbour. The second-to-none setting for scuba diving and snorkelling gets you up close and personal with the local marine life, while pebbly coves are your go-to for a stint in the Mediterranean sun. Calanque d'En Vau is pure Provençal paradise and a bucket list essential. Poster child for the entire National Park, its teal waters and wild beauty are a perennial favourite. Be sure to score a panoramic view from one of the natural rocky platforms too. You'll need to break out the hiking boots for this one, but the cinematic scenes are more than worth the walk.

The South of France is a must for your wanderlust. Boasting some of the best beaches in the business, you can't go wrong with a sandy escape to these sought-after shores.

View All Villas in South of France 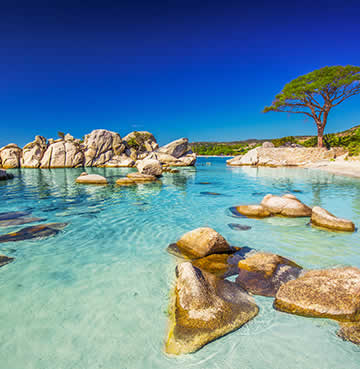 Set your sights 170 miles south of the Côte d'Azur and you'll find a French island basking in the Italian sun. Not to be outdone by the mainland, Corsica plays its cards beautifully with almost 200 Caribbean-style beaches and some 120 picture-perfect peaks. Tropical shores minus the long haul flight, this exotic escape is practically on your doorstep! Affectionately referred to as the Ile de Beauté, this stunner was turning heads long before holidaymakers got wise to its natural wonders…

Paradise doesn't get much sweeter than this southern showstopper. Sensational powder-white shores and sparkling blue waters are a match made in heaven if you're seeking a sun and sea sanctuary. The quintessential cove curls out for three kilometres and despite Palombaggia's popularity there's little trace of tourism. Relax to the sound of gently rolling waves and sink your toes into the soft, tropical sand – you'll be high on coastal cloud 9 before you know it! Accessorised with fascinating rock formations and silky smooth boulders, distinctive stylings are sure to capture your heart and mind. You just have to sea it to believe it…

This legendary bay isn't just Corsica's pride and joy – it's been voted the best beach in all of France. Considering how stiff the competition is, that's one coveted claim to fame! Shallow waters, breathtaking views and Caribbean-style sands will send any sun-seeker into a soothed state. Plus a little row of low-key beach bars and a cheeky afternoon cocktail never hurt anyone. 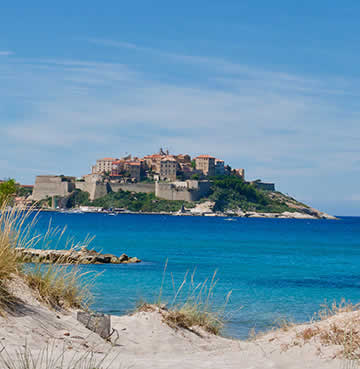 Pssstttt... Palombaggia is a 10 minute drive from the popular resort of Porto Vecchio. Indulge in the islands equivalent of the Côte d'Azur, where lively marinas, designer boutiques, fine French cuisine and buzzing bars inject a taste of the glamorous Riviera lifestyle.

Trade one crowd pleaser for another and head to the sweeping shores of Calvi. Lapped by some of the clearest water on the island, the six kilometre stretch boasts a stunning citadel backdrop and swoon worthy sands. Ancient landscapes are reimagined with rows of sunloungers and bright blue umbrellas, while the moon-shaped bay glitters under the Mediterranean sun. It's a shore thing you'll fall head over heels for this postcard-perfect coastline.

Birthplace of Christopher Columbus, take a page from the legendary explorer's book and unleash your adventurous streak! Wet and wild watersports are available along the beach, with holiday favourites like jet skiing, kite surfing and sea kayaking in strong supply. If you prefer a little paddle instead of an all-in experience, the gently shelving sands mean there's no better spot to take a refreshing dip. Bars and restaurants are on hand to make your Calvi beach day as hassle-free as possible, so all you need to worry about is making those magical holiday memories.

With almost 200 beachy strings to its bow, Corsica is paradise for lovers of all things sand, sea and sun. From northern treasures to southern pleasures, how many will you discover on your next villa holiday?

View All Villas in Corsica

France's claim to fame extends far beyond its seductive shores. From glorious countryside to hilltop villages, it's a treasure chest of itinerary gold. If you're scratching your head as to how you'll possibly squeeze it all in, we've handily compiled some of the best bits to help you get the show on the road…